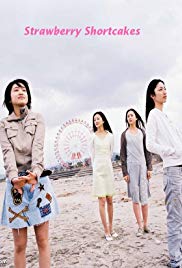 Strawberry Shortcakes (2006) is a Japanese film by director Hitoshi Yazaki. The film, based on the Japanese manga of the same name by Kiriko Nananan, concerns the life of four girls, as they deal with their own insecurities while living in the metropolis of Tokyo. This movie ranked 7th Best Film at the 2006 Yokohama Film Festival and got Best Supporting Actress and Best Cinematography prizes from the same festival.