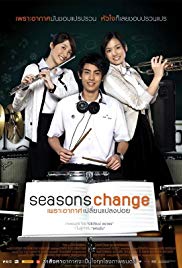 The story takes place at the College of Music, Mahidol University over one year and covers the three seasons that Bangkok typically experiences – summer, winter and monsoon. It chronicles the life of a young high school student, Pom, and his impulsive decision to attend a music school, unknown to his parents, because of a girl he has secretly liked for three years, Dao. At the music school, he befriends Aom, who eventually becomes his best friend at the academy. As a talented rock drummer he aids a wise Japanese instructor, Jitaro in research. He also forms a rock band with two friends, Ched and Chat. However, in order to become closer to the talented violinist Dao, he joins the orchestra and is assigned by the feisty conductor, Rosie, to play timpani. Eventually, as time schedule collides, he is forced to choose between playing in a rock band or the orchestra, and is also forced to choose between his crush on Dao, or his best friend, Aom.