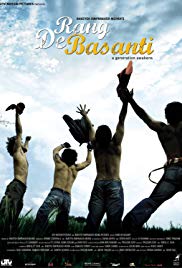 Sue comes to India to make a film on Indian revolutionaries.She is helped by her friend Sonia who introduces her to her friends Karan,Aslam,Sukhi and their head DJ.Sonia’s fiance Lt Ajay Rathod also joins the gang when in town.Their gang always gets in trouble with a political member Laxman who opposes their western culture.After many auditions Sue decides to caste DJ and his friend’s in her film.She also casts Laxman in a role thus ending his feud with the gang.All things are going well until Ajay dies in plane crash but manages to save everyone on board.The state minister declares that Ajay died due to his own negligence .DJ an his friends can’t take shame given to Ajay by minister and decide to fight for justice.Where things will take ugly events due to political games.