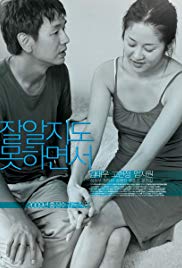 Invited to serve on the jury at a film festival, Director Ku does not care about his supposed-to-dos. Rather, chatting at parties and drinking now seem to be his all time favorites. Ku runs into an old friend who insists he come over for dinner and he stays the night at his friend’s house. Yet, the next day, Ku finds himself in trouble with an alleged accusation of seducing his friend’s wife. Later, he travels to Jeju Island to give a lecture. He hooks up with a painter for another long night of drinking. The day after, Ku is invited to the painter’s where he happens to see his ex-girlfriend.