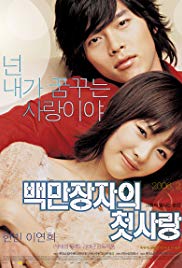 Jae-Kyung (Hyun-Bin ) is a tough guy, who is a high school senior,If he turns 19 years means, he could be a millionaire by inheriting his deceased grandfather’s wealth. Unfortunately his family lawyer informs Jae-Kyung about the will from his grandfather. In his will grandfather stated he can only become a millionaire after he graduates from Boram High School,a countryside local school. He has no other choice to avoid. Life became worse there and he can’t use his money or make friends. In his class, he meets Eun-Hwan (Lee Yeon-Hee)a pretty girl. She’s some kind of different from others. Things change Jae-Kyung’s mind and became close to their new friends. Eventually he fell in love with Eun-Hwan and things become strong after he knows about her secrets.