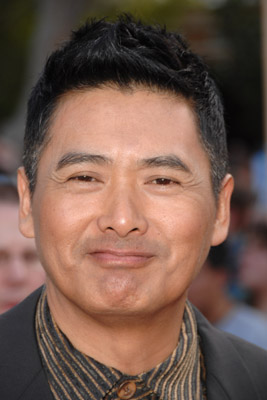 Chow Yun Fat is a charismatic, athletically built and energetic Asian-born film star who first came to the attention of western audiences via his roles in the high-octane/blazing guns action films of maverick HK director John Woo. Chow was born in 1955 on the quiet island of Lamma, part of the then-British colony of Hong Kong, near its famous Victoria Harbour. His mother was a vegetable farmer and cleaning lady, and his father worked on a Shell Oil Company tanker. Chow’s family moved to urban Hong Kong in 1965 and in early 1973, Chow attended a casting call for TVB, a division of Shaw Bros. productions. With his good looks and easy-going style, Chow was originally a heartthrob actor in non-demanding TV and film roles. However, his popularity increased with his appearance as white-suited gangster Hui Man-Keung in the highly popular drama TV series Shang Hai tan (1983). In 1985, Chow started receiving acclaim for his work and scored the Golden Horse (Best Actor) Award in Taiwan and another Best Actor Award from the Asian Pacific Film Festival for his performance in Hong Kong 1941 (1984). With these accolades, Chow came to the attention of Woo, who cast Chow in the fast-paced gangster film A Better Tomorrow (1986) (aka “A Better Tomorrow”). The rest, as they say, is history. The film was an enormous commercial success, and Chow’s influence on young Asian males was not dissimilar to the adulation given to previous Asian film sensations such as Bruce Lee or Jackie Chan. Nearly every young guy in Hong Kong ran out and bought himself a “Mark Coat,” as they became known–a long, heavy woolen coat worn by Chow in the movie (although it is is actually very unsuited to Hong Kong’s hot and humid climate). Further hard-edged roles in more John Woo crime films escalated Chow’s popularity even higher, and fans all over the world flocked to see A Better Tomorrow II (1987) (aka “A Better Tomorrow 2”), The Killer (1989) (aka “The Killer”), and Hard Boiled (1992) (aka “Hard Boiled”). With the phenomenal global interest in the HK action genre, Chow was enticed to the United States and appeared in The Replacement Killers (1998) with Mira Sorvino, The Corruptor (1999) with Mark Wahlberg, and, for a change of pace, in the often-filmed romantic tale of Anna and the King (1999). Chow then returned to the Asian cinema circuit and starred in the critically lauded kung fu epic Crouching Tiger, Hidden Dragon (2000) (aka “Crouching Tiger, Hidden Dragon”). His wide appeal can be seen in his “boy next door” type of personality and his ability to play such a broad spectrum of roles from a comedic buffoon to a lovestruck Romeo to a trigger-happy professional killer. A highly entertaining and gifted actor with dynamic on-screen presence, Chow continues to remain in strong demand in many film markets.