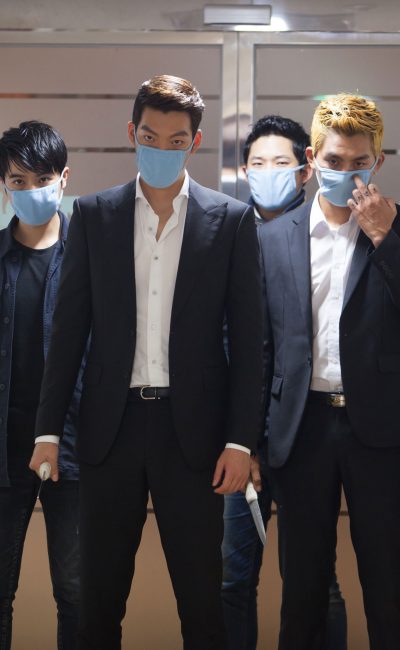 Kim Woo Bin wanted to become a model while he was in high school and didn’t have much intention of becoming an actor. However as his modeling career grew bigger, and he started getting offers to do commercials he was soon told that some basic acting was required and he decided to take on classes. Right away he was amazed by his acting teacher Won-joo Moon who quickly became his role model, and fell in love with acting profession. His acting debut was in a TV series “White Christmas” where he played character called Mad Mireu, a red haired genius prankster and bully of bullies and quickly became audience favorite. After this, he and two other model turned actors from White Christmas moved on to do sitcom “Vampire Idol” in which he played lovable vampire Gabri Ratis who spent his life thinking he was ugly, and only upon moving to earth became interesting to girls, and women too. Sitcom was meant to have 120 episodes, but has failed to attract viewers and was abruptly ended after 79. He moves on to do “A Gentleman’s Dignity” where he played a problematic high school kid with crush on his sociology teacher. His character was meant to be small, but as show progressed and his talent shined trough, writer Eun-sook Kim, wrote more material for him and his role grew. Similar thing happens with School 2013, where he only shows up by the end of third episode, and was meant to be supporting role, but he stole audience’s hearts instantly and was given much bigger role. His acting in this drama was often described as brave, as there were many scenes of him crying with and his relationship with co-star Jong-suk Lee became infamous. Soon, He will play lead in Friend 2, sequel to Friend (2001) of which he said it’s his favorite movie and he knows all the quotes by heart. He is also set to appear in a TV series Heirs (Inheritors) again written by Eun-sook Kim who now refers to him as “her muse”, where he will play rich, spoiled, and genius Choi Young Do trying to get revenge on his childhood friend by stealing his girl. Kim Woo Bin usually has words “charismatic actor” attached to his name in Korean media.