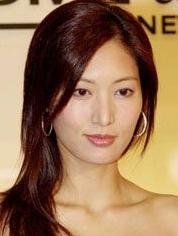 Valerie Chow was born in Hong Kong as Ka-Ling Chow, the only daughter of a well-off family. In 1991, she won Miss Hong Kong Pageant as the first runner up. She went back to Hong Kong University to finish her law degree before returning, in 1993, to her acting career. Chow’s career kicked off with a good start with “Wan 9 Zhao 5” (Twenty Something), in which she played Alice, a girl who tries to find true love in Hong Kong’s club scenes. Then came her big break, “Chungking Express”, in which she plays the woman who broke Tony Leung’s heart. She had only a few scenes, but made quite an impression. The blurry image of her wearing a bra and a skirt, walking around the house as if she is swaying in and out of space (and Leung’s memory), made Chow a symbol of mysterious seduction. After Chungking Express, Chow did a 20-eposide TV series, playing the outside interest of a honest married man; who eventually divorced his fat, cooking-oil-soaked wife. The series itself was a huge success, but her role was not warmly received, and her career began to go downwards. She went on to star in a string of insignficant films, which either showed her as a two-dimensional seductress, or tried unsuccessfully to “cleanse” her image as a home-wrecker. She finally decided to move to the States and start fresh. However, Chow’s career in Hollywood was equally uneventful, with the exception of her Revlon contract. After returning to Hong Kong, she found a job working for the marketing and events department of Lane Crawford, the Hong Kong equivalent of Neiman Marcus; and acting became her part-time job. Ironically, one of her latest part-time jobs, a 40-episode TV series called “Hap Qua Yin Som” (Healing Hearts), was her biggest success ever. Her role, a lawyer named Flora, was recognized as the perfect modern woman–smart, beautiful, and independent. The success of Healing Hearts led to another major cosmetic contract–Chow signed on to become the spokeperson for Neutrogena’s whitening mask, a new line that was launched in Hong Kong.