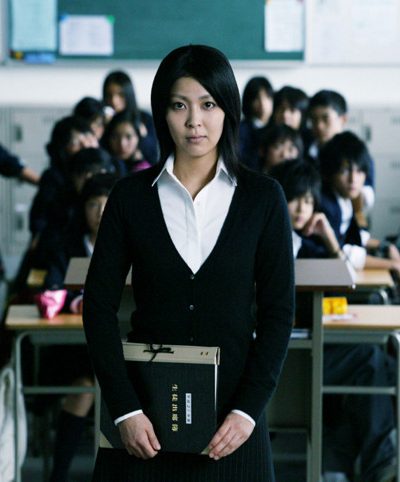 Born Fujima Takako in Tokyo in 1977, she found herself in a family of actors and actresses including her kabuki artist father, uncle and brother, a sister who would act in movies and would eventually marry a man from the entertainment industry. Her mother Norika is a businesswoman. Her niece is a kabuki actress. Her sister’s husband is also an actor. She appeared on the theatre stage at age sixteen and an NHK serial called Kura at seventeen. She hosted the annual New Year’s Eve NHK show Koohaku Uta Gassen at nineteen. She debuted her single Ashita, Haru Ga Kitara on the same program the year after. She became a full-fledged singer from thereon releasing regular albums and going on tour for her soft pop music. She has worked with Universal Music. She attended Asia University, but dropped out. She further branched out with a photo essay book in 2003. She was the winner of the Best Actress Of The Year award at the 29th Hochi Film Award and the 28th Japan Academy Prize both for the samurai film, The Hidden Blade. She married guitarist Sahashi Yoshiyuki in 2007 and gave birth to a daughter in 2015. She had met her husband working on the 2001 song Hana No Youni (‘Like A Flower’) and they had toured together. They had apparently become a couple in 2004. He is sixteen years older. That was his second marriage as he had divorced in 1998. These two facts angered her father, but she forged ahead and simply skipped having a wedding party. Being married her name became Sahashi Takako. She had earlier been connected to actor Oizumi Yo. For her traditional Japanese dance she uses the name Matsumoto Kouka. 2009’s Villon’s Wife garnered her several awards as did that same year’s Confessions. She left the Papado management agency in 2011 and opened her own agency. She did voice acting for the dub of Frozen and sang for the Japanese version in 2014. She was again on Koohaku Uta Gassen in 2017. She has continuously appeared on stage and, like most Japanese celebrities, endorsed corporate products like beverages, financial services and cosmetics. She is reportedly quarter Korean. She plays the piano and cites tofu as her favourite food. She used to have feminine long her, but beginning her tenth year singing she cut her hair and adopted a boyish look.