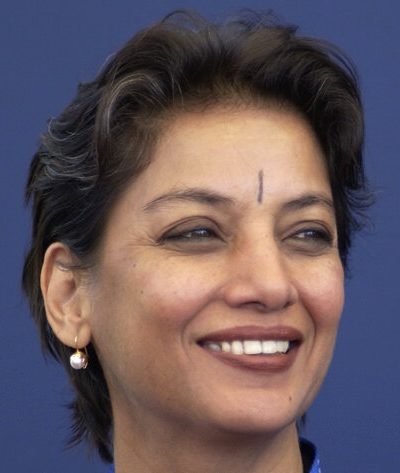 One of the leading lights of the now-largely-defunct Indian New Wave, Shabana Azmi (alongside the late Smita Patil) was one of the main female actors who dominated the films of the so-called “Parallel Cinema” in India in the 1970s and 1980s. Born to noted Urdu progressive poet and lyricist Kaifi Azmi and theatre actress Shaukat Azmi, Shabana has acted in films by virtually all of India’s most famous art-house directors including Shyam Benegal, Satyajit Ray, Mrinal Sen, Aparna Sen and others, as well as in commercial and middle-of-the-road Hindi films, where she has essayed several strong female characters (e.g., in Mrityudand: The Death Sentence (1997) and Godmother (1999)). Shabana Azmi was paired opposite Rajesh Khanna in 7 successful films.She is noted for her naturalness and intensity on-screen, matched by her fierce advocacy of the rights of women, minorities and slum-dwellers off-screen, both through activism and in her role as a Member of Parliament, where her consistent stand in defense of liberal values and the freedom of expression is noteworthy. She has also acted on stage to considerable acclaim, most notably in Tumhari Amrita with Farookh Sheikh. She is married to noted scriptwriter and lyricist Javed Akhtar.