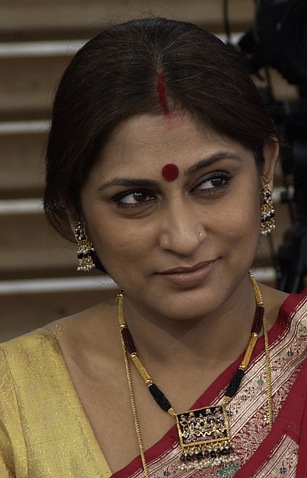 Rupa Ganguly was born in Kalyani near Kolkata, West Bengal, India. She was married to Dhrubo Mukerjee from 1992 until 2006. In an interview Ganguly said that her husband started feeling insecure about her recognition as an actress. Her son Akash was born in 1997. She was also in a live in relationship with her singer companion, Dibyendu. The couple lived in Ganguly’s Mumbai flat until the end of their relationship. Her appearance in the concluding episode of STAR Plus’s hit reality show, Sacch Ka Saamna (2009), the Indian adaptation of the British reality show, The Moment of Truth, created media stir.Rupa Ganguly debuted in the Anil Kapoor starter, Saaheb 1985, after her graduation from Calcutta. Her second role was in Malayalam film, Ithile Iniyum Varu (1986), with Mammootty as lead. Though her first role as a lead actress, was the pivotal role of Draupadi, in B.R. Chopra’s mythological TV series, Mahabharat (1988), which immediately got her attention, and also lead to a role in Mrinal Sen’s, Ek Din Achanak (1989). Her other notable works are in award-winning film, Padma Nadir Majhi (1993) by Gautam Ghose, Yugant (1995) by Aparna Sen, Abar Aranye (2003) by Gautam Ghose, Antarmahal (2006) by Rituparno Ghosh, apart from these film appearances she has done, numerous television series, both in Bengali and Hindi, including Sukanya (1998) etc. She also appeared in notable cameo roles in the films “Dekha” and “Hemlock Society”. After working in a few Hindi films, she shifted to Kolkata, and after appearing in numerous Bengali films through the 1990s, shifted base to Mumbai in 2007, with an English film called, Bow Barracks Forever (2004), directed by Anjan Dutt, and continued to act in Bengali films. She started working in Hindi TV series, with Karam Apnaa Apnaa (2007), moving on to Love Story (SAB TV series) (2007), and more recently in Agle Janam Mohe Bitiya Hi Kijo (2009). She won the National Film Award for Best Female Playback Singer for rendering her voice in the Bengali film Abhosheyshey. She has also performed opposite the south super star Dr. Vishnuvardhan in two films Inspector Dhanush (Hindi) and Police Mathu Daada (Kannada).In 2015 she joined Bharatiya Janata Party.