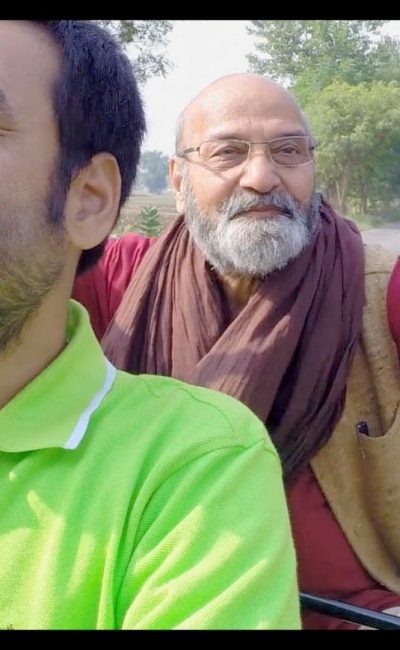 Padmashree Professor Ram Gopal Bajaj is an eminent theatre personality of India. He has been the Director of National School of Drama from November 1995 to Sept.2001. He has also been Chief of the National School of Repertory Company from 1988 to 1994. One of the most reputed directors of Indian theatre, some of his productions with NSD and its Repertory company were landmark. He possesses wide range of experience as an actor on stage, Radio, TV & Films. He is an all rounder well versed in all departments of Theatre including make-up, Production design and stage lighting. He has a unique of presentation and recitation of poetry. During his tenure as The Director, NSD…, he has contributed immensely for the excellence of the institution. Apart from strengthening the academic and artistic activities of the school, he’s also diversified various other activities like extension program, Publication and documentation program. He solely conceived and organized Jashn-e-Bachpan (National Children Theatre Festival), an important and unique event with participation of major children Theatre Groups from all over the country. He also introduced Bharat Rang Mahotsava a major theatre festival of India. This festival was organized in 1999 as part of the golden jubilee celebrations of India’s Independence and the festivals held subsequently in 2000 and 2001 by him were great success. Now these have become very important regular theatre event in India with International participation. Bal Sangam, a festival of traditional performing arts and folk forms, presented by children under the guidance of Gurus, experts and artists was also his brainchild. These festivals provided a wider platform in bringing together major theatre groups, both children and adults, as also traditional and folk artists, and gave opportunity to feature a wide spectrum of theatre productions in various languages representing the vibrant culture and contemporary Indian theatre. He has been strongly voicing the need of introducing theatre in the school education system. He is one of the founder members of Dishantar Theatre Group of Delhi. Professor Bajaj has been felicitated with a few awards for his all- round creative contribution to Indian Theatre, including Sangeet Natak Academy Award, Sahitya Kala parishad Award (Delhi), National Press India Award, Sahitya Kala Parishad Samman, Nandikar Samman (Kolkata) and was awarded with “Padma Sri” by the President of India in 2003. He has been a member of the Executive Board, General Council and Boards of various organizations and institutions in the field of theatre, film, Mass communication in official and personal capacities. He has been nominated as a member on the boards and committees as nominee of Honorable President of India in his capacity as the visitor of central universities like Banaras Hindu University, Pondicherry University amongst others. A member of the Indian National Commission for Co-operation with UNESCO nominated by Ministry of Information and Broadcasting. Member of core group for Tenth Five Year Plan of Ministry of Information and Broadcasting and Ministry of Culture, Government of India. Served as Member of Jury of National Film Awards 2000 and also Member of Jury (Panorama) for International Film Festival of India 2001. Worked as Professor and held Dr. S. Radhakrishan Chair, Central University of Hyderabad, 2002-2003.