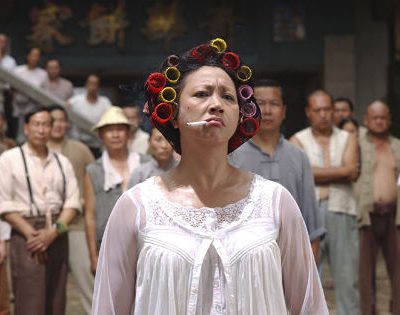 Qiu Yuen apprenticed Chinese martial arts and Beijing-opera skills with Jackie Chan and Sammo Hung as well as Kam-Bo under the same master, Yu Jim-yuen, whilst at the Beijing Opera School (part of the Chinese Drama Academy). Early in her career, Cheung Cheun Nam (aka Qiu Yuen) worked briefly as a female stunt artist and as a night club performer during the late 60s ’til the early 70s. Feeling the future for female stunt artists was not promising, she took a hiatus from her career, and got married. In 1974 at the age of 24 Qiu Yuen had a small role in her (at the time) one and only international production, in the James Bond film, “The Man with the Golden Gun” (1974). She portrayed a student who rescues Roger Moore Having been away from Hong Kong’s film business for more than 28 years, she again starred in the international smash hit, Kung Fu Hustle (2004), just by chance. Qiu Yuen was only accompanying a junior woman fellow (of China Drama Academy) to the audition, but Stephen Chow, the director and star, soon noticed Yuen Qiu. Reports note Stephen Chow got her to agree to appear after much persuasion. Her first grandchild was born in 2004.