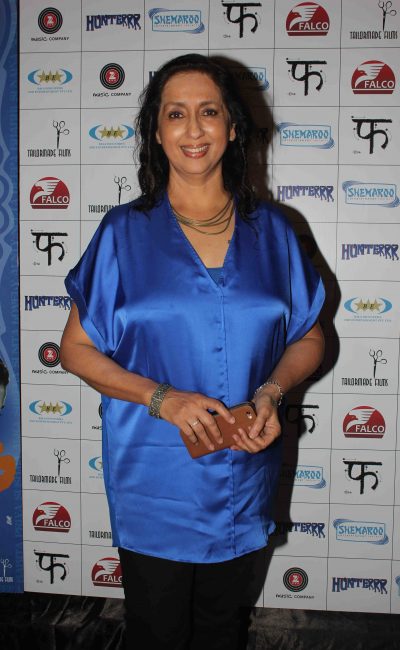 Neena Kulkarni is an actress, column-writer, producer and director. She was born and brought up in Mumbai. She completed her schooling from Canossa Convent High School in Mahim, and then went on to complete her further education from Elphinstone College. She began her acting journey in the 1970s on the Marathi professional stage and Hindi experimental stage, simultaneously taking part in fashion shows and modelling. She met Pt. Satyadev Dubey, her first guru, and went on to be a part of several Hindi Productions under his direction. Mohan Rakesh’s Adhe Adhure, Shankar Shesh’s, Mayavi Sarovar, and Willie Russell’s Educating Rita are a few of her prominent plays. Dr Vijaya Mehta chose her to play Shabbo in Anil Barve’s Hamidabai Chi Kothi in 1978, and thus began her long journey with Bai into the remarkable world of Marathi Theatre, with Mahasagar and Savitri. She continues to assist Bai in her workshops. Mahasagar, which she even directed, Akasmat, Dhyani Mani, Vatvat Savitri, Dehabhaan, Prem Patra, Hamidabai Chi Kothi and Chapa Kaata are some more of her successful award-winning Marathi plays. Among English plays, Neena has been part of Mahatma Versus Gandhi and Wedding Album. Her prominent Marathi films are Savat Maazhi Laadki, for which she won the State Award for Best Actress, Aai, Uttaryan and Shevri, for which she won the National Award and the PIFF Award as Producer. Neena has also won the State Award for the Best Supporting Actress for Sari Var Sari and the Filmfare Best Supporting Actress Award for Bioscope. Her latest television show, Yeh Hai Mohabatten is running its fourth year. Among her international projects, Neena has been part of the film, The Best Exotic Marigold Hotel and Rani, an eight part series in French, telecast on channel France Deux .