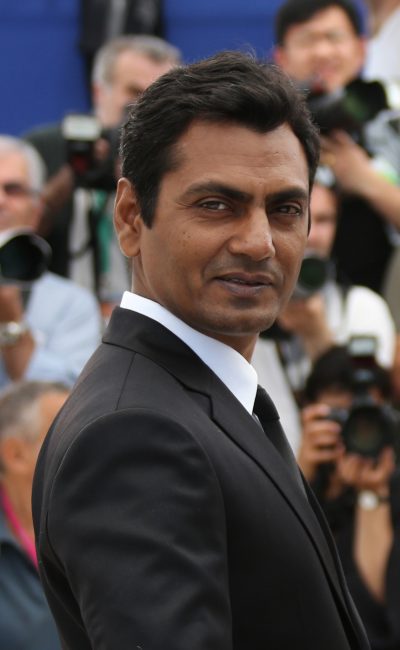 Nawazuddin Siddiqui (born 1974) also known as Nowaz is an Indian film actor who has appeared in some of Bollywood’s major films including, Black Friday (2004), New York (2009), Peepli Live (2010), Kahani (2012), Gangs of Wasseypur (2012) and Gangs of Wasseypur – Part 2 (2012). Early life and education Nawazuddin Siddiqui is from Budhana a small town of Muzaffarnagar district in Uttar Pradesh, where his father is a farmer. [2][3][4] Siddiqui grew up amongst nine siblings, seven brothers and two sisters. [5][2] After graduating in science from a local college, he worked as a chemist in a petrochemical company for a short while. But boredom set in soon, and he moved to Delhi, here in the next one and a half year period, he started watching plays, while working a watchman at an office. He got associated with Sakshi Theatre Group and worked with actors like Manoj Bajpai and Saurabh Shukla. Eventually he graduated from the The National School of Drama (NSD), New Delhi in 1996.Now he is a well known actor. Career After passing out of NSD, he shifted to Mumbai. Nawazuddin made his Bollywood debut in 1999, with a small role in Aamir Khan starrer, Sarfarosh. After moving to Mumbai he tried to get work in television serials, but did not achieve much success. After his debut, he appeared in minor roles, where he remained largely unnoticed, despite his strong performances. He did a short film The Bypass in 2003, where he appeared with actor, Irrfan Khan. Beyond that between 2002-05, he was largely out of work, and lived in a flat he shared with four other people, and survived by conducting occasional acting workshops. His appearance in Anurag Kashyap’s Black Friday (2007) paved way for other powerful roles. His first lead role in a feature film was in Prashant Bhargava’s PATANG, which premiered at the Berlin Film Festival, for which Nawazuddin’s performance has been praised by world renown film critic Roger Ebert (awarding the film 4 stars), a role which ‘transformed his acting style’. In 2009, he appeared in a cameo role in hit song “emotional attyachar” in the movie Dev D in his moniker as Rangila along with his duo Rasila (known together as Patna ke Presley). However it was his role of a journalist in Aamir Khan Productions’s Peepli Live (2010), that first got him recognition as an actor. This was followed by a role as police informer Gopi in biopic, Paan Singh Tomardirected by Tigmanshu dhulia also in the same year. He however became a household name post Kahaani (2012), where he played the archetypal short tempered cop Khan. Gangs of Wasseypur followed which furthered his fame. He played his first primary role as Sonu Duggal in Ashim Ahluwalia’s Miss Lovely which premiered at the 2012 Cannes Film Festival, a role Nawazuddin describes as his “most real performance so far.” Nawazuddin also played the lead role in the upcoming films, Gangs of Wasseypur – Part II and Aatma. He will be appearing in Aamir Khan’s 2012 release, Talash. Gangs of Wasseypur is being touted as the career defining film for Nawazuddin where he played the role of Faizal Khan, as the second son of Sardar Khan, played by Manoj Bajpai. His gaudy style of dress, magnificent accent and out-of-the-way mannerism in Gangs of Wasseypur has left an impression on Bollywood critics. His film PATANG currently in release in the U.S. and Canada, is garnering much attention for Nawazuddin with rave reviews from the New York Times, Los Angeles Times and Roger Ebert.