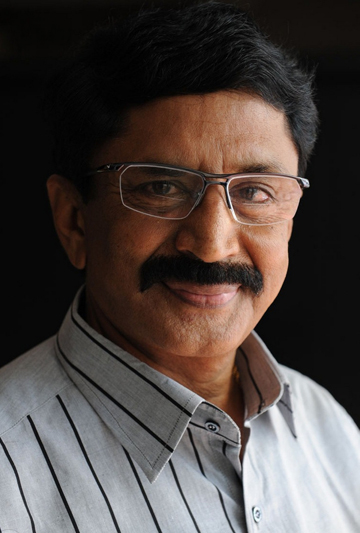 Murali Mohan born on June 24, 1940 in Chataparru village, Andhra Pradesh, India. His father Madhava Rao was a freedom fighter. After he finished schooling in his village, he went to Eluru for higher education but failed. He shifted gears in 1963 and started his own business dealing in electrical motors and oil engines. Also, as a hobby, he acted in stage dramas in Vijayawada. In 1973, Murali Mohan debuted in films as a leading man for a famous producer, Poornachandra Rao Atluri, who was looking for a fresh face. Even though, the film “Jagame Maya” (1973) received a positive response, Murali Mohan continued to struggle for another break, until a famous director Narayana Rao Dasari cast him in the film “Tirupati” (1974). Dasari was impressed with his performance and cast him in 40 more films. In 1975, Murali Mohan wrapped up his business and shifted to Madras to concentrate fully in films. He acted in 350 movies. He was the leading man to actress Jayasudha when she gave a star-making performance in the title role of Jyothi (1976), directed by K. Raghavendra Rao. Rao would cast Murali Mohan again in the film “Kalpana” (1977), where actress Jayachitra played the title role. He and Jayachitra became a hit pair when they signed many films together. They both dismissed rumors of an affair. He said that the period between 1975 and 1985 was his best phase in his film career. He is the first person to act in Television serials from the Telugu film industry. In 1990, he retired as a leading man and opted to act in the character roles. After taking a break from active Cinema, he served in various positions in National Film Development Corporation (NFDC) and the regional Film Development Corporation (FDC) in Andhra Pradesh. In addition, he is the Honorary President of the Telugu Movie Artists Association. He has also been an active member of the Telugu Desam Party. In 1980 he formed his own production company with his brother Kishore titled Jayabheri Productions, and his first movie as producer was “Varala Abbay” directed by the noted filmmaker K. Balachander. It also turned to be Murali Mohan’s 100th film. Till now Jayabheri has produced about 25 films. Murali Mohan has ventured into the real estate business. He further said that he would use a portion of his earnings to help poor students and encourage them toward a better life. Since its inception “Murali Mohan Charitable Trust” has adopted nearly 400 students of Engineering & Medicine. Eligible students have been funded irrespective of caste and creed. Murali Mohan is married to Jalandhara, with whom he has a son Ram Mohan, and a daughter Madhu Bindu.