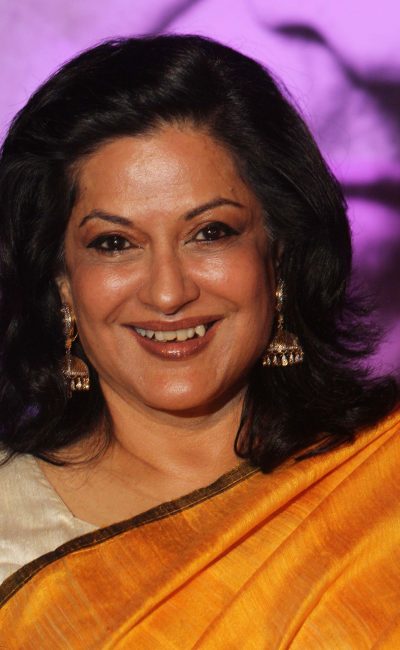 Moushumi Chatterjee was considered one of the most beautiful faces to hit the Hindi screen in the 1970s. She is an actress originally from Kolkata (formerly Calcutta), West Bengal. She made her film debut in the Bengali hit, The Young Wife (1967) directed by Tarun Majumdar when she was in her early teens. Her debut as heroine in the Hindi film Anuraag (1972) came courtesy of another famous Bengali director Shakti Samanta. She played a blind girl who falls in love, and her performance earned her a Filmfare nomination as Best Actress. The film, itself, won the Filmfare Award as Best Picture. That led to another huge hit film, where she played a rape survivor in Manoj Kumar ‘s Food, Clothing and Shelter (1974). Her rape sequence in the film is still considered to be one of the most disturbing scenes in Hindi cinema. Her performance earned her a Filmfare Nomination as Best Supporting Actress. That led to more starring roles opposite superstar Amitabh Bachchan in the thriller Without Name, Character or Reputation (1974) and Basu Chatterjee’s film Destination (1979). She played heroine opposite all the other top leading men, such as Sanjeev Kumar, Jeetendra, Rajesh Khanna, and Shashi Kapoor. She did more Hindi and Bengali hit films, and by the 1980s, she made the transition to character roles of mother and bhabhi (sister-in-law). Moushumi’s personal life has kept her in the gossip columns since the beginning of her career. She married early to producer Jayanta Mukherjee, son of legendary music composer and singer Hemanta Mukherjee. They have two daughters, Payal and Megha. She acted in Hindi films after marriage, which was unusual at that time, as it was customary to act in films before marriage and leave films after marriage. At one point, she was said to leave her husband for film distributor Ramesh Sippy (not to be confused with the director of Sholay (1975)) but then changed her mind and stayed with her husband and their two daughters. In 2005, she was thrilled when director Tarun Majumdar’, who had introduced her to films in The Young Wife (1967) decided to introduce her younger daughter Megha in his next Bengali film “Bhalobasar Anek Naam”. (Moushumi played a supporting role as cousin sister to Megha in the film.) Her older daughter Payal has made a name for herself behind the camera as the creative head at the Prime Channel, which oversees television shows. In middle age, Moushumi has accepted new challenges as playing a dual role in Tanuja Chandra’s Zindaggi Rocks (2006) and crossed over to Canada to act in Bollywood/Hollywood (2002) for which she received a Genie Best Supporting Actress nomination. She also has entered politics in 2004, even though she has had no experience, but she tried to compensate with enthusiasm and hard work.