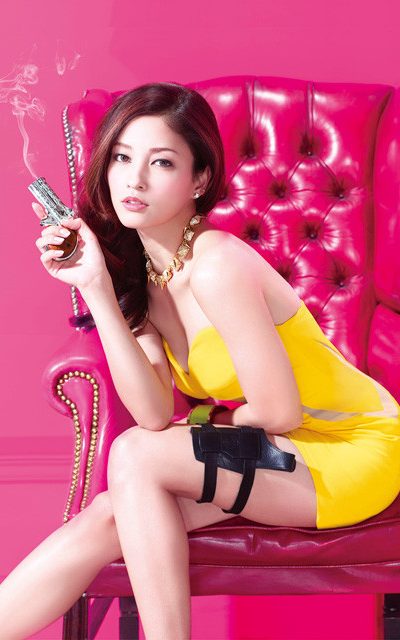 The Japanese actress, model and singer Kuroki Meisa was born Shimabukuro Satsuki in Nago, Okinawa, which is the southernmost Japanese prefecture and occupied by the USA (her father is Brazilian-American) since World War II, on 28.05.1988. She was scouted while in junior high school and began modelling for JJ Magazine, which is a traditional women’s magazine. Like Shimabukuro Hiroko she attended Okinawa Actors School from which she graduated in 2007. She began her career in 2004 on stage and subsequently had a role in Fuji TV’s Medaka. She would go on to win the Television Drama Academy Award and TV Life Drama Grand Prix for Best Supporting Actress in for her role in the Fuji TV’s drama, Ninkyo Helper, in 2009. Like most Japanese celebrities she also began singing and contributed to the soundtrack to the movie Crows Zero as well as act in it. Two full-length albums followed. Likewise, she does advertisements and commercials for corporate products including Epson, Armani and Uniqlo. She married pop musician Akanishi Jin in 2012 and gave birth to their first child in the same year. She gave birth to their son in 2017. She is managed by Sweet Power.