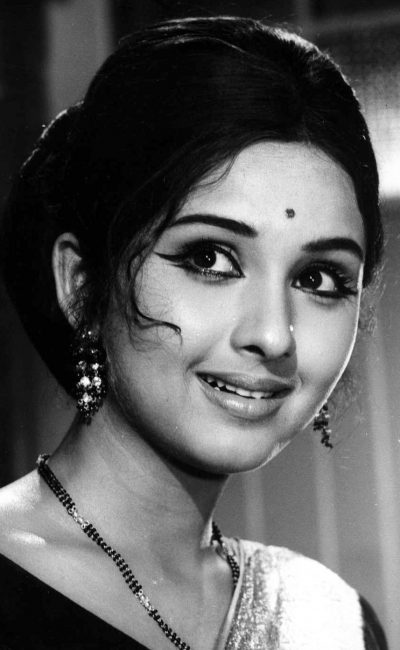 Born in the Dharwar/Karwar region in the State of Karnataka (formerly known as Mysore), in the Marathi-speaking Chandavarkar family, this beautiful actress, with an oval cherubic face and innocent smile, has acted in many films like Saas Bhi Kabhi Bahu Thi (1970), Humjoli (1970), Rakhwala (1971), Jaane-Anjaane (1971), Manchali (1973), Bairaag (1976), Aafat (1977) just to name a few. A former student of Bassel Mission High School, she won a talent competition, gained enough confidence to consider acting in Bombay’s Bollywood, but faced challenges including being written off as ‘too young’. She refused to play ‘sister’ and other character roles and instead committed herself to print advertisements. She was finally given a break by Sunil Dutt, who noticed her ads, and cast her in his 1968 film Man Ka Meet (1969), opposite his brother, Som Dutt. This movie also launched Vinod Khanna as a villain. She was assisted by none other than Nargis, who helped her improve her Hindi, non-classical dancing, and driving vehicles. Petite, conservative and traditional, she refused do any bikini-clad character on or even off-screen photo shoots, and did not learn to swim, despite of facing stiff competition from taller actresses such as Zeenat Aman and Parveen Babi. She has acted opposite well-known Bollywood heroes such as Sanjeev Kumar, Dharmendra, Rajesh Khanna, & Dilip Kumar. Following the accidental death of her husband, Siddharth Bandodkar, the son of Dayanand, the first Chief Minister of Goa, Leena married noted actor-singer, Kishore Kumar during 1980, and sired a son, Sumeet Kumar. After Kishore’s death in 1987, she continues to live with her singer-actor step-son, Amit Kumar, and has even written lyrics for his music album. She has made TV appearances in Sony’s ‘K For Kishore’ during 2007, as well as reality shows.