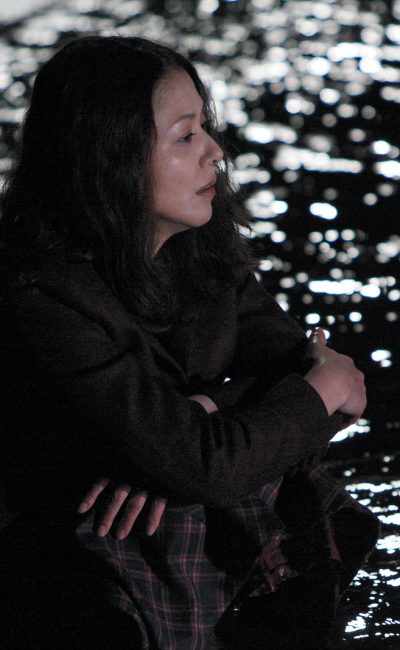 One goes to Atsugi to see the American war machine at work or see where one of Japan’s leading pop singers was born. Born in Kanagawa just south of Tokyo in 1966, Koizumi Kyoko participated in and won the Staa Tanjo! (‘A Star Is Born’) television talent program in 1981 and subsequently released her first single in March of 1982. She shaved her hair at age 17 in 1984 in order to portray a different image than the other pop idols and defy her agent at Burning Production. She landed a number 1 hit in the Japanese charts in 1984 and quickly became a Japanese idol at age eighteen. She appeared on the annual New Year’s Eve variety show Kohaku Uta Gassen in 1984. She ruled the Japanese charts for the next ten years. She introduced the JD Salinger novel Catcher In The Rye on the radio, which made the novel better-known in Japan. Ironically, she later admitted to having not read the book at the time. She also had her own radio show. She married character actor Nagase Masatoshi in 1995 and divorced in 2004. They had met at the magazine AnAn where she was a staff photographer. Kyoko shifted her focus to acting and was in films like Onmyoji in 2001, Tokyo Tower and the superlative Tenten both in 2007 and Tokyo Sonata in 2008 among others. She returned to the small screen to work with Kurosawa Kiyoshi of Tokyo Sonata on the Penance serial in 2012. She participated in the Yell From Nippon charity group to buy soccer balls for Eritrean children in 2006. She was romantically connected to Kazuya Kamenashi of the group KAT-TUN, who was half her age, in 2006. Koizumi and her two-decade long friends of Tokyo Ska Paradise Orchestra performed a cover version of Makana Tayou (‘Red Sun’) by Misora Hibari in 2011. She won the award for Best Actress at the 66th Mainichi Film Awards for Mainichi Kaasan. She was back in the top ten of the Japanese charts when Shiosai No Memori (‘Memories By The Waterside’) from the NHK serial Amachan, in which she also acted, in 2013. She was dating actor Toyohara Kosuke, who was still married but separated, as of 2015. Like all celebrities she has pushed products like Shiseido, Lotte, JR, Suzuki and Kirin beer. She is self-managed.