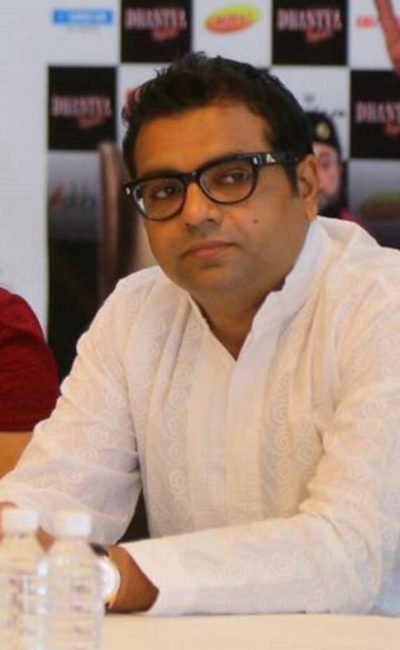 Krunal Pandit was born and raised in Mumbai. His father was an officer in an American company and his mother is a housewife. He studied at Gujarati Medium School and Goklibai Punamchand Pitambar High School in Vile Parle West. His coming into acting was an accidental event. He was working with ETV as a production manager and one day one of the actors, who used to play various characters in a news based countdown show, ended up with a dislocated shoulder. When the director found out about this, he was really angry with him and asked him to go to the hospital. Now they were in a situation where they had to shoot, but shooting without the actor was impossible. After an hour of discussion, the director asked Krunal to get into the make-up room and get ready. He was shocked and told the director that he couldn’t do it because he didn’t know how to act. The director calmly asked him to just get ready and say his lines on action. So, in short he had no choice because as a production guy it was his responsibility to complete the shoot on time and therefore he complied. That’s where his journey began. After that he had to leave his job because it was against his company’s policy. He then joined Paresh Rawal’s theatre group as a backstage artist and slowly started doing small characters in plays. He also started auditioning for advertisements and the hard work paid off. He started getting good commercials like Tanishq with Mr. Amitabh Bachchan, Maxlife Insurance, Maruti Suzuki and many more. In all these years, he has come to realize that there are no shortcuts. He says he’s been lucky to have worked with legends like Mr. Amitabh Bachchan, Salman Khan, Paresh Rawal and now in Inside Edge with Vivek Oberoi.