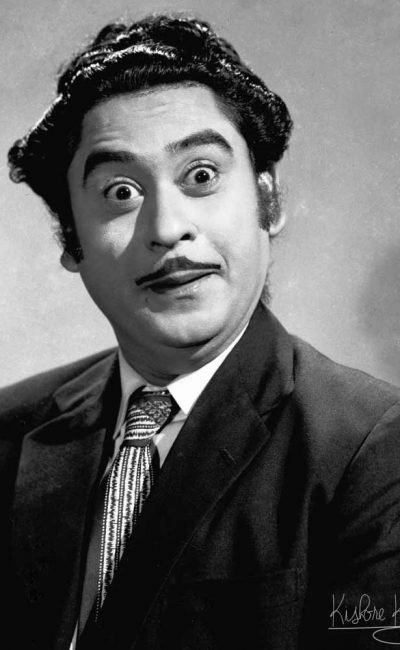 Abhas Kumar Ganguly was born in Khandwa, now in Madhya Pradesh. His dad’s name was Kunjilal, a lawyer by profession, and his mom’s name was Gouri Devi, who came from a wealthy family. Kishore was the youngest in the Ganguly family, preceded by Ashok Kumar, Sati, & Anoop Kumar (I). Sati was married to Sashadhar Mukherjee, who was the brother of film-maker Subodh Mukherji, and Bollywood actors Joy Mukherjee & Deb Mukherjee. Sati’s son, Shomu Mukherjee, went on to marry Tanuja, and who subsequently gave birth to Kajol and Tanishaa Mukerji. Tanuja is the sister of Nutan, who, in turn, is the mother of actor Mohnish Bahl. Tanuja and Nutan are the daughters of the famed Shobhna Samarth. Sati was also aunt-by-marriage to Ram Mukherjee, who would subsequently marry and give birth to Raj Mukherjee and Bollywood actress, Rani Mukerji. Ashok’s daughter is noted Bollywood actress, Preeti Ganguli, who is married to comedian and character actor, Deven Verma. Ashok’s grand-daughter is actress, Anuradha Patel. While Ashok went on to become a successful actor, Abhas, who was renamed Kishore, shunned acting, and preferred singing and mimicking K.L. Saigal. His brother, Anoop, while struggling to make a name himself, noticed this, and encouraged Kishore to sing in his own voice. When Sachin Dev Burman happened to visit Ashok, he heard Kishore singing, and immediately signed him to sing for Bollywood movies. After Sachin’s passing away, his son, Rahul Dev Burman took over and openly favored Kishore over other male singers. He always wanted to be a singer, but acting was thrust upon him, and he did his best to live up to it. A Leo, Kishore was also known for his mad-cap comedy movies, and for his eccentricity as he used to ‘talk’ to his trees in his home, and had even put up a sign ‘Mental Hospital’ right outside his residence in Khandwa. He was also parsimonious, so much so that he was in arrears to the Indian Income Tax authorities, yet never missed a chance to make fun of them (Aur Peechey Pad Gaya Income Taxum, Jai Govindam Jai Gopalam). When he refused to endorse former Indian Prime Minister’s 20 point Program during the 1975-1977 Emergency, he was banned from the Government-controlled media namely All India Radio and Vividh Bharati. Even duets with his voice were censored. He was not the only one in Bollywood, as others like I.S. Johar, Dev Anand, Shatrughan Sinha openly condemned Mrs. Gandhi’s regime. After the emergency, her political party (Congress) was overwhelmingly ousted by the electorate in favor of the Janata Party. Kishore made a record by being the only singer to have sung in more than 90 films for a single hero which was for Rajesh Khanna. Kishore sang in 91 films for Rajesh Khanna.His closest friends were Rajesh Khanna, R.D.Burman, S.D.Burman, Mohammad Rafi.He refused to lend his voice to Amitabh Bachchan in period 1982-1987 many times, when the latter refused to do a guest appearance in a Kishore-produced film and this affected Bachchan’s career as many of his films flopped post 1983. His marriages to some of the most popular and attractive Bollywood actresses (Madhubala, Yogeeta Bali,Leena Chandavarkar) not only raised eyebrows, but added to his popularity.Fact was each of these women with exception of Yogita Bali fell in love with Kishore Kumar. Madhubala loved him immensely but had health issues so died. Then in 1976 Yogita claimed to love him and married Kishore, but then Kishore realized she had married him for his money so divorced her. Leena was a widower but Kishore fell in love with her and proposed her and they were happily married till his death. He introduced his son, Amit Kumar, (sired from his first wife Ruma Ghosh aka Ruma Guha Thakurta) to sing, often along with him, and then amazed his fans by marrying widowed Leena Chandavarkar, who was just two years older than Amit. He sang 245 songs picturised on Rajesh Khanna across 92 films, which is an unbeaten record for singer-actor combination. Kishore sang 245 songs for Rajesh Khanna, 202 for Jeetendra, 119 for Dev Anand and 131 for Amitabh. He had recorded the duets “Kaho Kahan Chale” for the film Bulundi, “Pyar Ka Dard Hai” from Dard and “Tum Jo Chale Gaye” from Aas Paas, a few days before his heart attack in 1981. He suffered his first heart attack on 24th January 1981 in Kolkata in the noon hours and within a gap of another four hours, suffered his second heart attack. The first solo song sung by him, after recovery from his two attacks was “Mere Sang Sang Aya” from Rajput (1982) and the duet with Asha – “Mausam Bheega Bheega” from Gehra Zakhm. In the comedy, Badhti Ka Naam Dadhi (1974) a song ‘Karne Chaley Thhey Shaadi Meri, Khud Ban Baithey Dulha’, sung by Amit, hilariously chastised his dad for getting married, instead of searching for a bride for his son. Through Leena he sired another son, Sumeet Kumar. Their marriage was intact until his unexpected passing on October 13, 1987, due to heart failure for the third time. Kishore has not only been immortalized by his songs, but also by his talents as an Actor, Producer, Director, Script-Writer, & Lyricist. His movies continue to be popular even now on TV, as do his songs on both TV and radio.