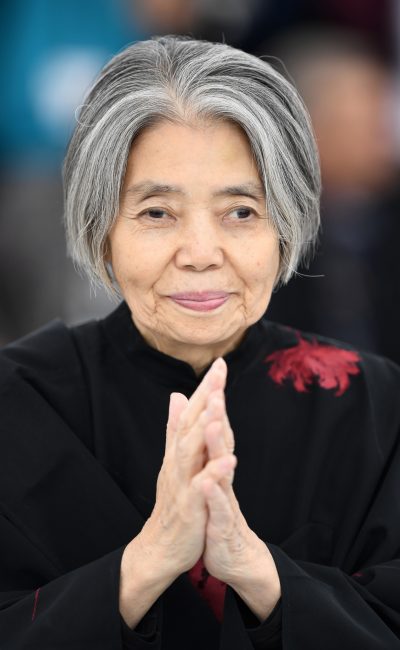 She began acting after high school as part of a theatre troupe. Her stage name was Yuuki Chiho. Years later she would relay that she only started acting for the money. Her father had wanted her to become a pharmacologist, but she missed her examination due to a fractured foot. She changed her alias to Kirin Kiki after being asked to auction something on a television show claiming she possessed nothing else she could offer. Her marriage to fellow trouper Kishida Shin came to an end after four years in 1968. She married pop musician Uchida Yuya in 1973. The couple quickly raised eyebrows by opting to live under separate roofs. They had a daughter. They are separated today. Her daughter, Uchida Yayako, portrayed the younger character of Kiki’s in Tokyo Tower: Mom And Me, And Sometimes Dad. Uchida Yayako is married to the actor Motoki Masahiro of Departures fame. Kirin’s granddaughter acted alongside her in Red Bean. Uchida Yayako lives in Great Britain. Kirin appeared in many television serials, feature films and inevitably commercials like the Tora-San series, the offbeat Pistol Opera, Tokyo Tower: Mom And Me, And Sometimes Dad and the dismal Red Beans by which time she was very well-known. She has focused on the big screen, instead of television, in recent years. Heartache struck successively in 2003 and 2004 when she had to contend with a detached retina in her left eye, which made her believe she would go blind, and breast cancer which later – as of 2017 – would be announced incurable and terminal. She wanted people to know she undergone a mastec-tomy following her breast cancer diagnosis. Kirin won the Best Supporting Actress award at the Yokohama Film Festival for her work in the comedy Kamikaze Girls and Half A Confession in 2004 and the Japan Academy Prize for Mom And Me, And Sometimes Dad for Best Actress in 2008. She reports that she is a preferred recluse who does not like children and preferably does not interact with her own child or grandchild. She has managed herself through a fax machine since the death of her manager circa 2008.