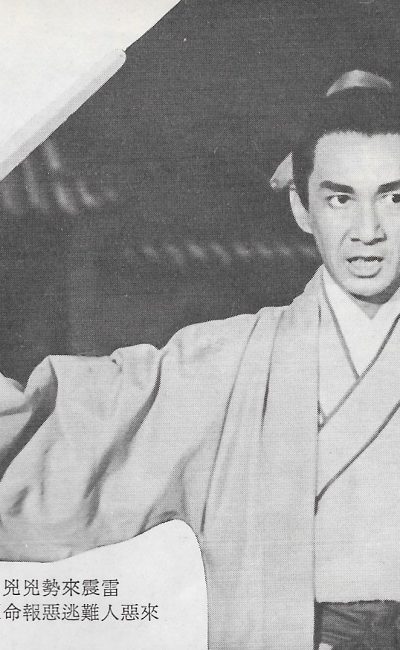 Kelly Lai Chen lost his father when the Japanese invaded Shanghai. Kelly was about four years old at the time. His mother took him and her other children to live with her parents. A few years later Kelly’s mother died too. Kelly’s grandfather was a well known person in Shanghai, he ran several businesses, among them the Tianchan Theatre. The family lived in the same building as the theatre, until 1949 when the communist army advanced on Shanghai, and his grandfather thought it was safer for them if he sent his wife and grandchildren to Hong Kong for a while. As it turned out, Kelly stayed in Hong Kong longer than just a while. He joined MP & GI (later Cathay) Studio and made his debut in the film ‘Qing shan cui gu’ (Green Hills and Jade Valleys) in 1956, and he was under contract with that studio until the late 1960s. He then formed the Golden Eagle (Jin Ying) film production company with his actress sister Betty Loh Ti, director Chiu Feng Yuan and writer Fan Yi. They used the Cathay Studio’s equipment, their personnel and their stars. In return Cathay got the distribution rights to the films. They produced 7 films before they had to close down. By then his sister had died of an overdose of sleeping pills, and Chiu Feng Yuan had decided to join the Shaw Brothers studio. And the Cathay Studio had been on the decline for some years, and in 1971 they decided to give up film production after the completion of the films that were in production at that time. Kelly Lai Chen then left the film business, but he joined a film processing company, specializing in color film processing. Later, when Raymond Chow and some other persons wanted to establish a film processing lab, he joined them, and he was manager of the Cine Art Laboratory for more than 20 years, until Raymond Chow and his expanding Golden Harvest production company bought out all the other investors in the Cine Art company. In 1996 Kelly turned up in a small part in ‘Goo waak jai 2: Ji maang lung gwoh gong’ (Young and dangerous 2), and in year 2000 he made a guest appearance in ‘Fa yeung nin wa’ (In the mood for love).