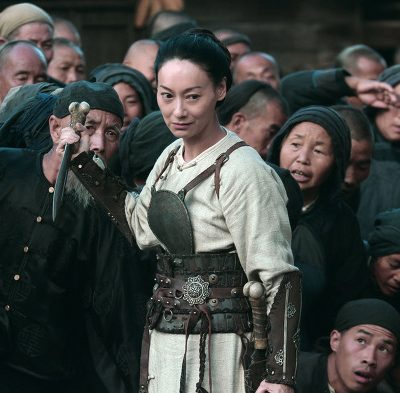 Born Kara Hui Ying-Hung on in Shandong, China. Her Family moved to Hong Kong in 1966 and she started working at night clubs at fourteen. Her family lost their savings from her father’s business acquaintances. Being left penniless, Hui’s mother, herself and her siblings were forced to peddle goods on the streets of Hong Kong. In the early years, Hui’s family resided in the poor shanty town of Rennie’s Mill. She quit schooling. At 14, she became a nightclub dancer. She was discovered by film director Chia-Liang Liu and cast in Le combat des maîtres (1976) in 1976. Soon after, she started in many films directed by Liu Chia-Liang. She signed with Shaw Brothers Studios in February of 1975 and made over forty action movies. She won the 1st Best Actress Role for her critically acclaimed role as Jing Dai-Nan in 1981 classic, My Young Auntie (1981) at the 1st Hong Kong Film Awards in 1982. After Shaw Studios closed down in 1985, Kara’s career transition was very smooth and she has since portrayed more serious roles with very great success, winning the Hong Kong Film Awards, Hong Kong Film Critics Society Awards, Changchun Film Festival, Pacific Meridian, Asian Film Awards and Golden Horse Awards for her portrayal of a mother in the 2009 film, At the End of Daybreak and winning Best Supporting Actress for her role as Yeung Feng in Rigor Mortis in 2014 at the 33rd Hong Kong Film Awards. Kara Hui is a legend. She has acted in over 138 films and still is active today in the Hong Kong film industry.