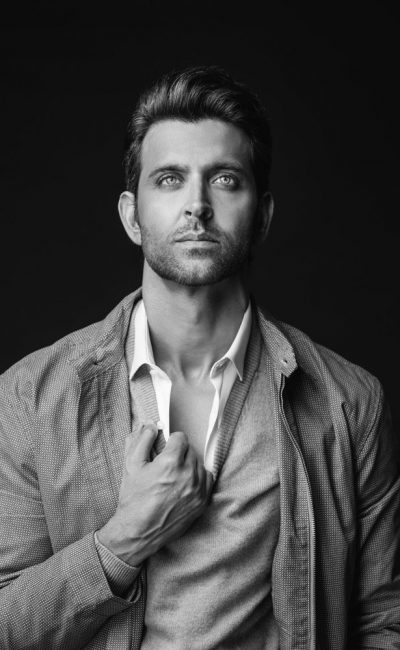 Hrithik Roshan is an Indian actor, born on 10th January 1974, well known globally for his versatile roles, unmatchable dancing skills, and attractive looks. After having appeared in films as a child actor in the 1980s, Roshan made his film debut in a leading role in Kaho Naa… Pyaar Hai (2000) for which he earned Filmfare Awards for Best Actor and Best Male Debut. It was not just a new actor on the block, but a star was born. He became a romantic hero, an action hero and revolutionized the Hindi film industry in significant ways. Never before had any debutant become an overnight sensation of this kind. After his debut film, he appeared in Karan Johar’s family drama Kabhi Khushi Kabhi Gham (2001), which received immense love not just in India but even overseas. In 2003, Hrithik Roshan, who is often described as “India’s Most Complete Actor” stunned everyone and proved once again that it is not just the uber-flattering looks that he brings to the table. This was when he flawlessly essayed the role of an intellectually disabled boy in Koi… Mil Gaya. Not only did the film set the cash registers ringing massively, but Roshan also bagged multiple awards for his acting prowess in the film, including the Filmfare Best Actor award. The makers turned it into a franchise because of the huge commercial success and love that the film received. The next installment, Krrish (2006) saw Hrithik Roshan playing a superhero, which went on to become the first ever-successful Indian superhero in Indian cinema. Roshan received his 3rd Filmfare Award for Best Actor in 2006 for his performance as an enigmatic master thief in the action film Dhoom 2, with which he redefined style and action and set new bars. He established himself as a major action star. He took stylized action to a whole new level with Bang Bang in 2014, which did massive business at the box office. In 2012, he created history in Indian cinema when his film, Agneepath minted a whopping 25 crs only on its opening day. That is the star power and pull of Hrithik Roshan. We also saw him portray the role of the Moghul emperor, Akbar the Great himself in Jodhaa Akbar (2008) for which he received immense critical acclaim and also an International award at a Film festival. In 2011, Roshan was seen in Zindagi Na Milegi Dobara, which became an absolute cult classic. Before becoming an actor, Hrithik toiled as a largely uncredited assistant on film projects, gradually progressing from unglamorous tasks such as set-sweeping, tea-fetching, or clapper-loading up to a major role in story development, camera, direction, and editing. Since his entry into the industry, Hrithik has parlayed the natural gift of symmetrical features and a tall athletic frame into unimaginable standards. Through unparalleled work ethic, sheer honesty, talent, and commitment as an actor, he also effectively redefined the Hindi film hero. Actors would now have to act and dance and fight for themselves like never before. With the kind of roles Hrithik has played on screen, there is no doubt about his acting prowess and versatility. From playing a intellectually disabled boy in Koi… Mil Gaya (2003) to an emperor in Jodhaa Akbar (2008); from playing a quadriplegic in Guzaarish (2010) to a visually impaired man in his more recent film, Kaabil (2017), he has played diverse characters effortlessly with his sheer talent. Hrithik, a hot favorite for award show performances because of his smooth dance moves, high energy, and immense charm has won 66 awards out of 84 nominations, having a win rate of an outstanding 79%. Hrithik has also won many Style and Glamour awards for his appearances and red carpet outings. He was in fact voted as the ‘Most Handsome Actor in the World’ in 2018 by worldstopmost.com Hrithik married his childhood sweetheart and longtime girlfriend, successful interior designer and businesswoman Sussanne Khan in December 2000. They have two sons: Hrehaan, born in 2006, and Hridaan, born in 2008. While the two got divorced in 2014, they chose to maintain cordial relations with each other for their kids and even today are good friends.