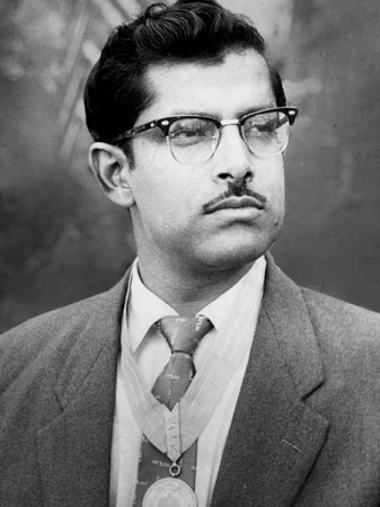 By no means is he any glamorous director, yet Hrishikesh Mukherjee is one of the most popular and beloved filmmakers in Indian cinema. His magic lay not in the glamor or largeness so often associated with cinema, but in its simplicity and warmth. He began his career in Bombay, 1951, as an editor and assistant director to Bimal Roy, another great director himself. His first directorial venture, Musafir (1957), centering on an old house where three unrelated stories dealing with birth, marriage and death occur in a series, was a disaster. But director Raj Kapoor was impressed and strongly recommended Hrishida as director for Anari (1959). Starring Kapoor himself and Nutan, the film was a critical and commercial success. His next film, Anuradha (1960), about an idealistic doctor who neglects his wife to focus on his work, got him the President’s Medal Award. But from then on throughout the 1960s decade, none of Hrishida films were particularly distinguishable, barring Asli-Naqli (1962), a Muslim melodrama; Anupama (1966), which was based on a true incident; Aashirwad (1968), a family drama; and Satyakam (1969), about an idealist seeing his dreams crumble after Indian independence. Then Hrishida made what is considered his masterpiece – Anand (1971). This classic film gave a complex but compassionate look at the balance between hope, fear, life and death and saw Rajesh Khanna’s greatest performance as a terminally ill man who wishes to live life to the full before he dies. It was an auspicious beginning to the 1970s, for that time proved to be an exceptionally good time for Hrishida as he gave the public excellent films like Guddi (1971), a semi-satiric look at the film industry and generally considered as Jaya Bhaduri’s debut film; Abhimaan (1973), the Bachchans’ greatest ever performance together; and Hush Hush (1975), a comedy about a newlywed professor’s joke on his pompous brother-in-law. These films gave an extremely skilled and detailed look at the middle-class mentality. Few people understood human nature as well as Hrishida – in all his films he examined their aspects, particularly their failings and foibles and the outworn values people always seem to hold on to. However in the 1980s, the advent of the superstar Amitabh Bachchan and of larger-than-life films saw Hrishida’s brand of filmmaking die out. Recently he attempted a comeback with _Jhooth Bole Kauwa Kaate (1999)_, but sadly it was a futile effort as the film was a commercial and critical failure. However, the magic of his films still lingers after three decades, and he will be best remembered for his film Anand (1971), which told that people who die but remain in heart and mind do not die, but become immortal. No one justifies this truth more than Hrishida.