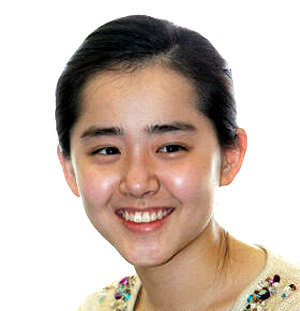 Moon Geun-Young was born on May 6, 1987 in Gwangju, South Korea. Her immediate family consists of parents and one younger sister. Moon Geun-Young began her acting career from a young age as a child actor. During the third grade of her elementary school, Moon Geun-Young performed in her school’s play and became enthusiastic towards acting. After her performance in the play, Moon Geun-Young asked her parents to send her to an acting institute. At first her parents rejected her idea, but Moon Gun-Young did not give up. The following year, while in the 4th grade of elementary school, Moon Geun-Young asked her parents again. This time around, her parents replied if presidential candidate Kim Dae-jung won the election they would send her to acting school. Fortunately for Moon-Geun-Young, Kim Dae-Jung won the presidential election in 1997. By the 6th grade of Moon Geun-Young’s schooling she enrolled in an acting institute in Gwangju. While learning acting at the institute her profile was sent by the institute to Seoul and in the following year she was cast as an extra for a few television dramas. After more CF roles, Moon Geun-Young made her proper TV drama debut in 1999 with the KBS children’s drama “Potato”. Moon Geun-Young also acted in the documentary “On the Way (2000)” directed by Jae-eun Choi. In 2000, her big break came while performing as the child character Eun-Seo in the KBS2 drama “Autumn in My Heart (2000)”. With the drama’s large following, she became recognized by the Korean public. In 2010, while promoting the theatrical play “Closer” Moon Geun-Young was asked what was her favorite performance and she stated that it was “Autumn in My Heart (2000)” due to her acting inexperience at the time and having to act on pure instinct. After acting in more dramas, Moon Geun-Young performed in the motion picture “Lover’s Concerto (2002)”. In 2003, Moon Geun-Young took on her first lead role in the critically praised and commercially successful horror film “A Tale of Two Sisters (2003)”, directed by Jee-woon Kim. “A Tale of Two Sisters (2003)” helped display Moon Geun-Young’s acting ability in a more dynamic setting. With Moon Geun-Young’s romantic comedy “My Little Bride (2004)” in 2004, she perfected her cute wholesome image and found further commercial success at the box office. During this time, Moon Geun-Young picked up the nickname “the nation’s younger sister” (Gukmin yeo-dong-saeng”) due to her cute little sister image. Interesting to note, Moon Geun-Young mentioned that her management company was happy with her performance, but she was not. Her next films, 2005 “Innocent Steps (2005)” & 2006 “Love Me Not (2006)” were not as commercially successful nor did they receive favorable critical reviews. In 2006, Moon Geun-Young was accepted at Sungkyunkwan University and majored in Korean Language and Literature. During this time, Moon Geun-Young took a break from acting and did not perform in any titles. In 2008, Moon Geun-Young made her return to acting in the SBS period drama “Painter of the Wind (2008)”. The role marked a departure for Moon Geun-Young as she played a woman who disguises herself as a man to become a painter. Primarily due to the risky decision to cast Moon Geun-Young in the lead character role, the production company were worried about the commercial viability of the drama series. Filming also came with some difficulties. On October 9th, Moon Geun-Young fractured her nose while filming a scene for “Painter of the Wind (2008)”. Shooting for the series halted for one week while Geun-yeong recovered. As it turns out, “Painter of the Wind (2008)” received solid ratings and received favorable critical reviews. Moon Geun-Young also garnered the top prize (Daesang Award) at the SBS Drama Awards for her performance in “Painter of the Wind (2008)”. In 2010, Moon Geun-Young made another bold step in her acting career by performing as the sometimes villain in the KBS2 drama “Cinderella’s Sister (2010)”.