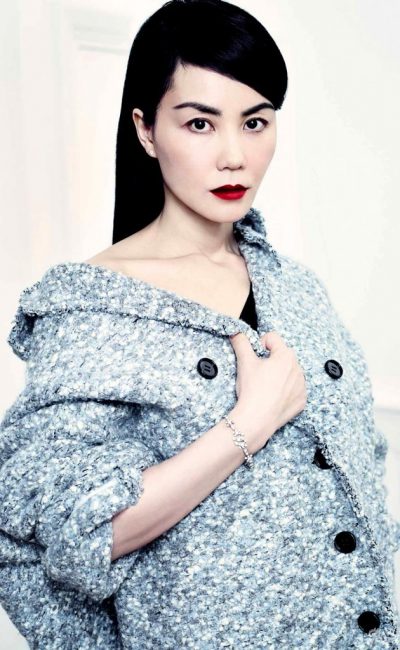 Her mother (now deceased) was a singer and her father a mining engineer. They moved with her older brother to Hong Kong when she was 18 and she began to take singing lessons. Her teacher introduced her to Cinepoly Records, where she first recorded under the name Wong Jing Man and was given the English name Shirley Wong for three albums. She sang predictable Cantopop and was unsatisfied with her career and eventually left for New York to carve her own identity, returning several months later. Given more creative freedom, she favoured the sounds of R’n’B in her new releases and also started writing her own songs. Her quirky sense of fashion and on-stage antics were often compared to Bjork’s. In 1994 she reclaimed her real name and released the self titled “Faye Wong”. The album had no cover but a blank white casing and booklet. It cemented her attitude towards music & media, Wong was all about music and did not care for frills and publicity. Her cover of “Dreams” by The Cranberries set her aside from the ballad-crooning Cantopop industry dominated by male singers. In 1995 she released “Restless”, with 8 original works by Wong and 2 in collaboration with the Cocteau Twins. This album is widely considered by fans and Wong herself as her best work and most artisically ground-breaking as one song is purely instrumental and 4 sung in a jibberish language invented by Wong. She left Cinepoly in 1997 and was signed to EMI for a record amount. She worked with Cocteau Twins again, who wrote two songs for her first EMI release, “Faye Wong”. After 5 albums with EMI she is currently signed with Sony Records. Her first Sony release “To Love” has earnt her nominations in Best Album, Best Female Artist, Best Song, Best Producer, Best Lyrics and Best Arrangment. She married Dou Wei, the former lead singer of Black Panther, one of China’s first successful metal groups. They had a daughter but subsequently divorced. She has been romantically linked on and off again with Nicholas Tse Ting-fung, the bad boy of Cantopop 11 years her junior, since June 2000. Their first breakup was in March 2002 when Tse paired off with Cecilia Cheung Pak-chi, but he and Wong reconciled four months later. Other big Hong Kong entertainments names have been mentioned, including Anita Mui Yim-fong in May 2003, Mui’s agent Marianne Wong in November 2003, and on Wong’s part, fellow Beijing native and Hong Kong superstar Leon Lai Ming. Wong is known for being aloof with media and fans, skipping out awards ceremonies, and can be considered the Björk of Asia with regards to both her singing and acting careers. She won the Best Actress award at a Swedish film festival for her role in Chungking Express, her first major feature film. in 2003 she won the Best Actress award in Hong Kong for Chinese Odyssey 2002. She will appear in Wong Kar-Wai’s next Cannes Film entry “2046”. Unlike most Asian entertainers, acting is a secondary vocation compared to her unique pop sensibilities, becoming successful with both Chinese and non-Chinese audiences, singing primarily in her native Mandarin.