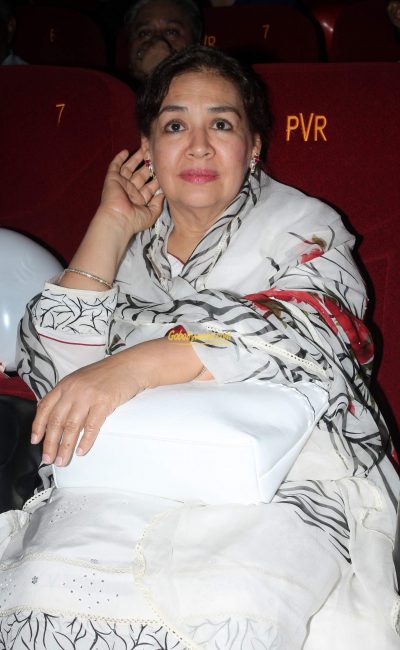 Farida Jalal was discovered by Filmfare’s United Producers Talent Hunt in the 1960s. She starred in her first movie as a child artiste, Baby Farida, in the 1960 hit ‘Chaudvin Ka Chand’. Thereafter she starred in a total of close to 130 movies as a character actress, and her roles included playing the parts of a a daughter, sister, a fiancée, & a family friend. She took a break for several years in the early 80s, and made a comeback and starred in roles of an elder sister, mother, grandmother, elderly neighbor, & widow. She is best remembered for her role as Rajesh Khanna’s betrothed in the 1969 hit Aradhana and for her song ‘Bhagon Mein Bahar Hai, Kaliyon Pe Nikhar Hai…’. She also played the betrothed of Rishi Kapoor in another hit Bobby in 1973. To date, She has won four awards for her performances in Paras, Henna, Mammo, and Dilwale Dulhaniya Le Jayenge. Farida got married to Tabrez Barnavar, and shortly thereafter gave birth to a son, Yaseen. Tragedy visited her when Tabrez passed away in 2003. She is one of few actresses that has had a role in every major Bollywood hit. Her 2007 forthcoming releases include Laaga Chunari Main Daag.