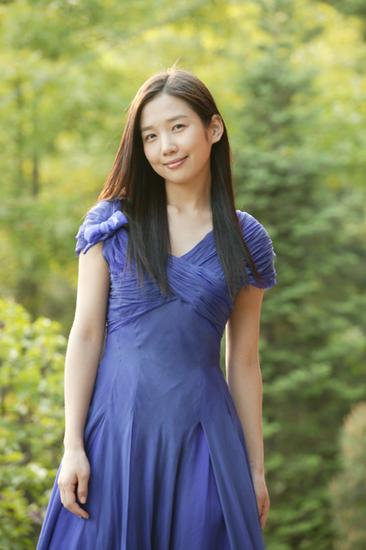 Born and raised in Seoul, South Korea, Jeong Da-bin, whose real name is Jung Hye-sun, was mostly known for playing ever cheerful and effervescent every girl roles. Known primarily for playing schoolgirl types, she gained quite a popular following in Taiwan as well particularly for her roles in numerous “Korean wave” miniseries. She attended Yongdok Girls High School and Gongguk University for two years where she majored in Drama. Her first breakout role was in the Korean fantasy movie “Danjeogbiyeonsu” in 2000 where she played alongside Kim Yun-jin, the star of the miniseries “Lost”. In 2004, she starred in a Korean high school romantic comedy called “Geunomeun Meoshitosda”, or ‘He Was Cool’. In that movie, she played an outgoing, spunky, comical and animated — yet very naive, awkward and infatuated — schoolgirl named Han Ye-won — which was to become her signature role. She also garnered several Korean television awards for her roles in such sitcoms like “The Summer Typhoon” (SBS, 2005); “She is Nineteen (SBS,2004); “Attic Cat” (MBC, 2003); “New Nonstop 2 & 3” (MBC 2002-3); “Trio” (MBC 2002); “The Full Sun” (KBS, 2001); and “Taeyangun Gadukhe” (KBS, 2001). Among her awards was the 2004 SBS Year-end Award for her role in “She is 19”, as well as the 2004 New Star Award. In 2003, she was awarded the MBC Best Actress Award in a Miniseries for “Attic Cat”. Jeong Da-bin also did numerous television commercials for Korean companies like DNS, BYC, LG Monitor, GS-25 Mart, CJ Jelly, Korea Telecom (KT), and GameTube, among others. On the morning of Saturday, Februay 10, 2007, Jeong Da-bin committed suicide in the apartment of her boyfriend in Seoul. She was found by her boyfriend hanging in his bathroom with a towel wrapped around her neck. While no apparent suicide note was left behind, an entry in her on-line bog shortly before her death indicated she was suffering from depression. Jeong, who has always been known for her outgoing, funny, cheerful and positive schoolgirl image, is survived by her father, mother and one younger brother in Seoul.