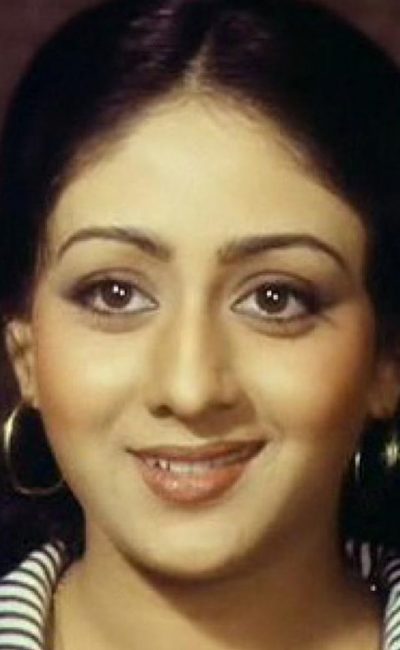 Bindiya Goswami was born on January 6, 1962 to a South Indian father and a Catholic mother in India. When she was growing up, she thought she would become an air hostess like her elder sister Pearl. However, when she was fourteen years old, she went to a party at her neighbor composer Pyarelal’s house. Jaya Chakravarthy, mother of superstar Hema Malini saw her and thought she bore a facial resemblance to Hema. She brought Bindiya into films and cast her in Jeevan Jyothi (1976) and then was immediately cast in Mukti (1977). However, Mukti was released first and was a hit, while Jeevan Jyothi flopped. Nevertheless, Bindiya attracted attention from important filmmakers, such as Basu Chatterjee, who cast her in three films with Khatta Meetha (1977) being a hit. Hrishikesh Mukherjee cast her in Golmaal (1979), which became the biggest hit of her career. Ramesh Sippy cast her in Shaan (1980), where she was romantically paired with Shashi Kapoor, who just a few years earlier played her father in Mukti. Bindiya acted with many films with Vinod Mehra, such as Dada (1979). However, her career was interrupted when she married him at age 18. The problem was he was already married to Meena Broca. Although his marriage to Meena was unconsummated and ended quickly, the publicity surrounding it hurt Bindiya’s career. Her marriage to Vinod Mehra lasted four years and ended in divorce when she was 22. But Bindiya held no bitterness towards Mehra, and when he died a few years later in 1990, she would forever speak about him very respectfully, calling him a “great soul.” In 1985, she became romantically involved with director J.P. Dutta and married him that same year. They would have two daughters Nidhi and Siddhi. She completely stopped acting in films and did costume designs for her husband’s films, such as Border (1997) and Refugee (2000). She also supported her daughters aspirations in show business, when Nidhi decided to become a film actress, while Siddhi went into production. Bindiya said she is proud of her daughters and speaks lovingly of her happy marriage to her husband of 30 years.