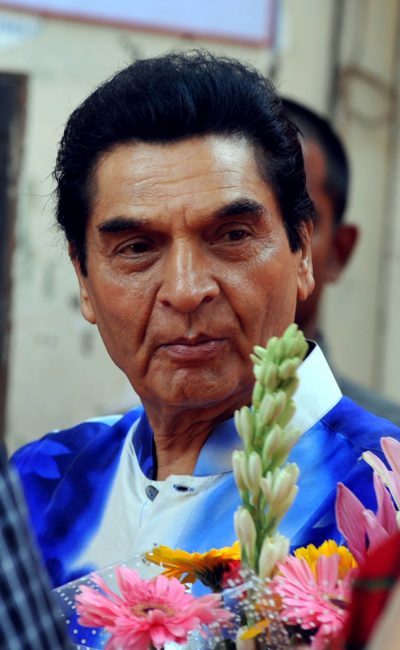 Asrani was born in a middle class Sindhi family. His father migrated to Jaipur after the Partition of India and opened a shop selling carpets. He has four sisters and three brothers: two elder and one younger. Asrani was highly uninterested in business and very weak in mathematics. He completed his matriculation from St. Xaviers School and did his graduation from Rajasthan College, Jaipur. He simultaneously worked as a voice artist on All India Radio, Jaipur, to pay for his education. His ultimate aim was to become an actor. He began to learn acting from Sahitya Kalbhai Thakkar from 1960 to 1962. In 1962, he traveled to Bombay and began to seek opportunities to act. In 1963, Hrishikesh Mukherjee advised him to learn acting professionally. In 1964 Asrani joined the Film Institute in Poona (now Film and Television Institute of India, Pune) and finished his course in 1966. He impressed many others and made his acting break in 1967 with a Gujrati movie opposite budding actress Waheeda (not Waheeda Rahman, the Hindi actress). He acted in four other movies, mainly as actor or supporting actor in Gujrati from 1967 to 1969. His debut film in Hindi was Hare Kaanch Ki Chudiyaan where he appeared as Biswajeet’s friend. He acted in Khoon Pasina, marking a serious role other than comedy. It was from 1971 that he started getting more offers as the main comedian in films or as the close friend of the lead actor. He did 96 movies from 1972-79.Directors like Hrishikesh Mukherjee, Atma Ram, Gulzar repeatedly cast him in the period 1971-1974 and his work got noticed through these films as they were hits. These roles he did from 1971-1974 set the tone for a number of supporting and comic roles in his career and in 70’s his demand was at its peak as he appeared in 101 films from 1970-1979 and had effective roles in them.He was hugely talked about in the 1970s and is one of Rajesh Khanna’s close friends.He worked with Rajesh Khanna in 25 films which includes 21 hit films. In the 1980s, he acted in over 107 films. Unlike his roles in 1970-84 which were pivotal to the plot, most of his roles from 1985-1993 were very minor mainly because the concept of a comedian was getting phased out and heroes preferred to do their own comedy and action films were ruling the roost in the period 1985-1994. Simultaneously he kept working in Gujrathi films in 70’s, 80’s as lead hero and achieved success as the lead protagonist in Amdavad No Rikshawalo, Saat Qaidi, Sansar Chakra, Pankhi No Malo, Jugal Jodi, Maa Baap, Chel Chabilo Gujarati. From 90’s he played as comedian or supporting actor in Gujrathi films like Mota Ghar Ni Vahu, Piyu Gayo Pardesh, Baap Dhamal Dikhra. During this period in 1982, he set up a small Gujrati production company with fellow artistes Dinesh Hingoo, Harish Patel and Salim Parvez (son of famous supporting actor Yunus Parvez). The company dissolved in 1996 with a large profit. Asrani also invested mainly in cloth and acted as investor for other actors, until 1991 when he lost a lot of money. From 1988 to 1993, he was a director for the Film Institute in Pune. In 90’s he did only 73 Hindi movies due to lack of good scope for him to perform. Muqabla (1993) saw him in a serious role after long time. D.Rama Naidu gave him a pivotal role to Asrani in Taqdeerwala in 1995 and once again comedy movies were being made from thereon . Asrani started getting good roles in films directed by David Dhawan and Priyadarshan from 1993 till 2012. The 2000s saw Asrani in a number of blockbuster films like Hera Pheri, Chup Chup Ke, Hulchul and Deewane Huye Pagal. He appeared in a serious role in Kyun Ki. He was an integral part of comedies by Sajid Nadiadwala, Priyadarshan after 2000. His screen space in films of Rohit Shetty and others has got reduced gradually after 2009.