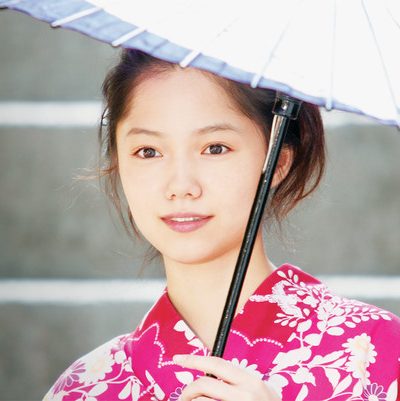 Miyazaki Aoi is a former child actor whose professional career started at age four in advertisements, commercials and as an extra. She was born in Tokyo in 1985. Her serial and feature film debuts came in 1999 when she was fourteen. In that year she starred in her film debut Ano Natsu No Hi and serial Genroku Ryoran. She began winning prizes two years later with the Best Actress award for Harmful Insect, a film which also featured a young Yu Aoi. The two Aois are friends. Likely her biggest role came in the manga adaptation Nana in 2005, which she had not read prior to obtaining the role. Nonetheless, she refrained from participating in the sequel, Nana 2, reportedly because of a mild sex scene. Yui Ichikawa replaced her. If the rumours of a conservative attitude were true Miyazaki was also demonstrating an equally conservative attitude with her looks maintaining a short hair cut. Her older brother Masaru Miyazaki is also an actor and appeared with her in the 2006 film Hatsukoi, which depicted a 1960s heist. She married long-time boyfriend Sôsuke Takaoka in the next year. This marriage lasted until 2011 adversely affected by Takaoka’s statement in that year that he was weary of all the Korean content on Japan’s Fuji TV claiming additionally the his wife supported his views. Naturally, both statements would be walked back later following a public backlash. More importantly perhaps Takaoka had claimed Miyazaki was unfaithful and had been with boy band member Jun’ichi Okada (with whom she was in Tenchi Meisatsu) and others. She and her brother travelled to India to highlight poverty (see the Tarinai Peace photo book that resulted), to Scandinavia to educate themselves on climate chaos and did other charity work in Japan. Miyazaki waited until December of 2017 to remarry. Her new beau was Junichi Okada, yet another actor and boy band dancer. Miyazaki and Okada first co-starred in the movie Kagehinataa Ni Saku in 2008 and subsequently played husband and wife in Tenchi Meisatsu in 2012. Reports of their dating had surfaced in 2015 by which time Miyazaki had grown her hair. However, the two were reported to have had an affair as early as 2011. Miyazaki is no different than most Japanese celebrities. She has done vocals for songs and, as stated, earlier, represented corporate products like shampoos and phone companies. Miyazaki cites photography as a favourite pastime. She, like her brother, is affiliated with the Hirata Office agency.