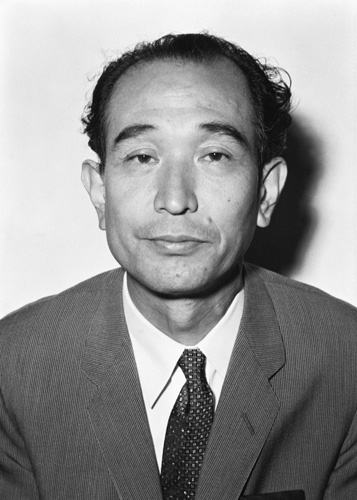 After training as a painter (he storyboards his films as full-scale paintings), Kurosawa entered the film industry in 1936 as an assistant director, eventually making his directorial debut with Sanshiro Sugata (1943). Within a few years, Kurosawa had achieved sufficient stature to allow him greater creative freedom. Drunken Angel (1948)–“Drunken Angel”–was the first film he made without extensive studio interference, and marked his first collaboration with Toshirô Mifune. In the coming decades, the two would make 16 movies together, and Mifune became as closely associated with Kurosawa’s films as was John Wayne with the films of Kurosawa’s idol, John Ford. After working in a wide range of genres, Kurosawa made his international breakthrough film Rashomon (1950) in 1950. It won the top prize at the Venice Film Festival, and first revealed the richness of Japanese cinema to the West. The next few years saw the low-key, touching Ikiru (1952) (Living), the epic Seven Samurai (1954), the barbaric, riveting Shakespeare adaptation Throne of Blood (1957), and a fun pair of samurai comedies Yojimbo (1961) and Sanjuro (1962). After a lean period in the late 1960s and early 1970s, though, Kurosawa attempted suicide. He survived, and made a small, personal, low-budget picture with Dodes’ka-den (1970), a larger-scale Russian co-production Dersu Uzala (1975) and, with the help of admirers Francis Ford Coppola and George Lucas, the samurai tale Kagemusha (1980), which Kurosawa described as a dry run for Ran (1985), an epic adaptation of Shakespeare’s “King Lear.” He continued to work into his eighties with the more personal Dreams (1990), Rhapsodie en août (1991) and Maadadayo (1993). Kurosawa’s films have always been more popular in the West than in his native Japan, where critics have viewed his adaptations of Western genres and authors (William Shakespeare, Fyodor Dostoevsky, Maxim Gorky and Evan Hunter) with suspicion – but he’s revered by American and European film-makers, who remade Rashomon (1950) as The Outrage (1964), Seven Samurai (1954), as The Magnificent Seven (1960), Yojimbo (1961), as A Fistful of Dollars (1964) and The Hidden Fortress (1958), as Star Wars: Episode IV – A New Hope (1977).